INSPIRE Missoula: The Story of a Beer

This is the story of a beer.

But this is also the story of a pumpkin. Well, rather 160 pounds of pumpkins. Because sometimes a beer is more than a beer. Sometimes, it is the result of passion and hard work and collaboration and community and a little bit of serendipity. This is the story of the Gourdgeous Pumpkin Ale from Great Burn Brewing and the place where the recipe begins: Lifeline Produce in the Bitterroot Valley. 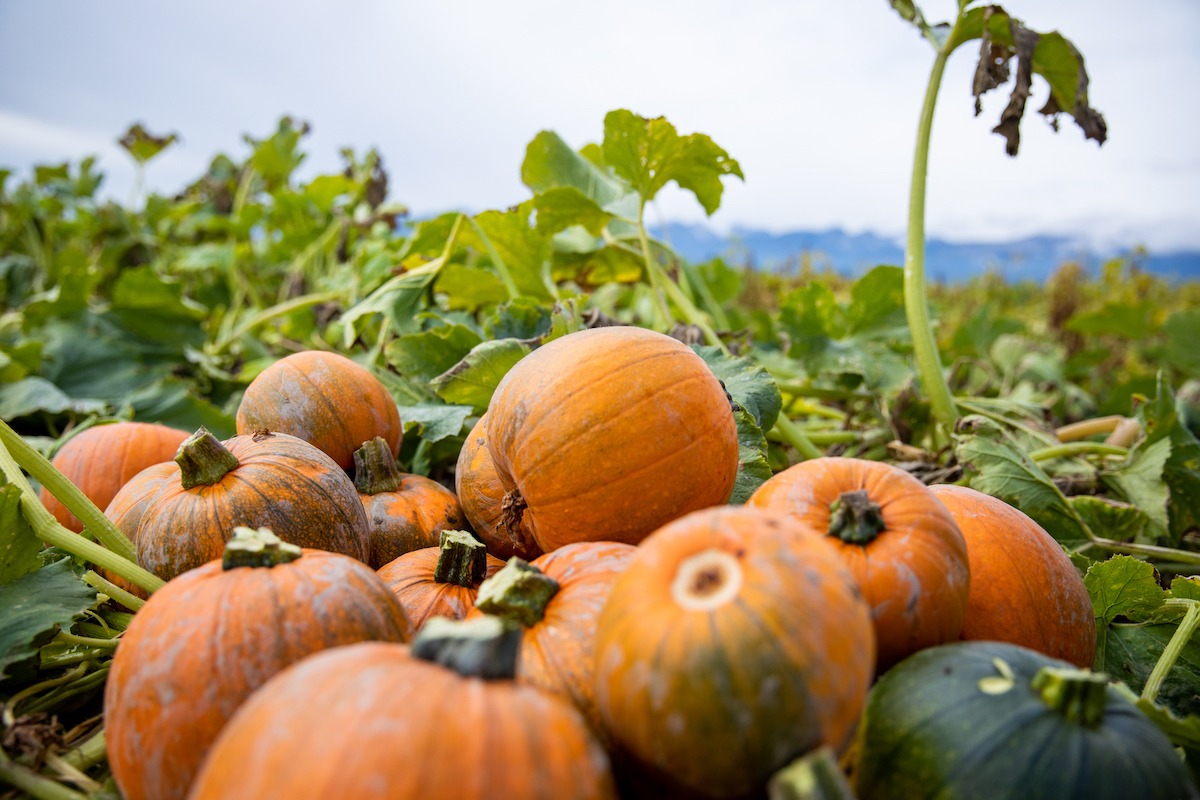 Steve Elliot met Mike Howard when Mike was the brewer at Blacksmith Brewing in Stevensville in 2008. Steve, co-owner of Lifeline Produce and long-time resident of the Bitterroot Valley, recalls the day they met. Unbeknownst to them, this was the beginning of a longstanding friendship and partnership. “There weren’t that many [breweries] when Blacksmith opened, so I decided to go and try it out. This kid opens the door for me—and I’m thinking he can’t even be old enough to drink—and he introduces himself and says he is Mike, the brewer. We struck up a friendship right then.”

Lifeline is a household name in the Missoula valley and surrounding areas. Steve and his wife and co-owner Luci Brieger have been involved since 1982, with Lifeline starting four years earlier in 1978. They raised three kids on the farm, a gorgeous 80-acre piece of land sitting under the snow-capped Bitterroot mountain range. Lifeline Produce, not to be confused with Lifeline Dairy (the two split back in the 2000s), is an organic and biodynamic farm which grows a staggering amount of crops on 12-15 acres of land. Lifeline’s crop list is extensive: lettuce, potatoes, winter squashes, cabbage, broccoli, cauliflower, kale, cilantro, beets, rhubarb, rummer squash, dill, and of course—the crop that brings us back to our story—pie pumpkins. 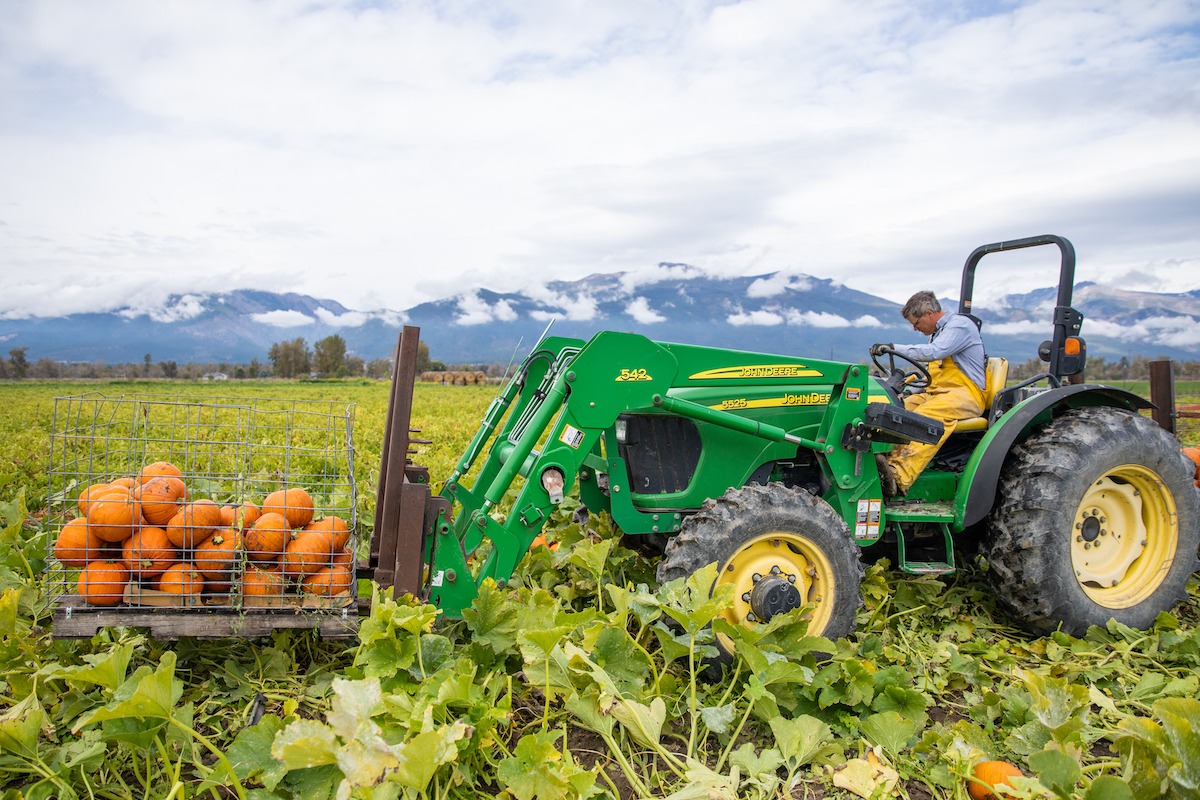 This is a story of a beer after all. And that beer is the Gourdgeous Pumpkin Ale, brewed as a small-batch seasonal at Great Burn Brewing in Missoula, Montana, where Mike Howard is now the co-owner and head brewer. Great Burn, like Lifeline, is a family business: Mike co-owns the brewery with his brother Greg, Greg’s wife Dianna Garrett, and friend Jennie Wright. The Howard family has been in western Montana since 1990, and Great Burn opened its doors for business in September of 2014. The name Great Burn is a tribute to their late brother, Chad Howard, a Lolo Hotshot and heli-repeller who tragically died in 2010 of brain cancer at the age of 35.

On that winter’s day in the Bitterroot in 2008 when Steve Elliot met Mike Howard, the idea of what would become Gourdgeous Pumpkin Ale was already brewing. While at Blacksmith, Steve and Mike worked together on a pumpkin ale, though according to Steve it has become a bigger deal at Great Burn. “We’ve always traded beer for pumpkins,” Steve laughs. “It’s a straight trade—he charges me full price for beer and I charge him full price for pumpkins."

That is 160lbs of pumpkins, to be exact.

While nothing says fall quite like a pumpkin beer, the process begins in the spring. Before we can get to the hoppy, crisp, flavorful goodness that is pumpkin ale that is ready to drink in late September, the seeds need to be planted in April.

“Pumpkins grow themselves,” Steve says. “My friends point out that I throw out some seeds and God does the rest, but I wouldn’t go that far. Pumpkins are nice because you can cultivate them with a machine, so you don’t have to do a lot of hand weeding.” 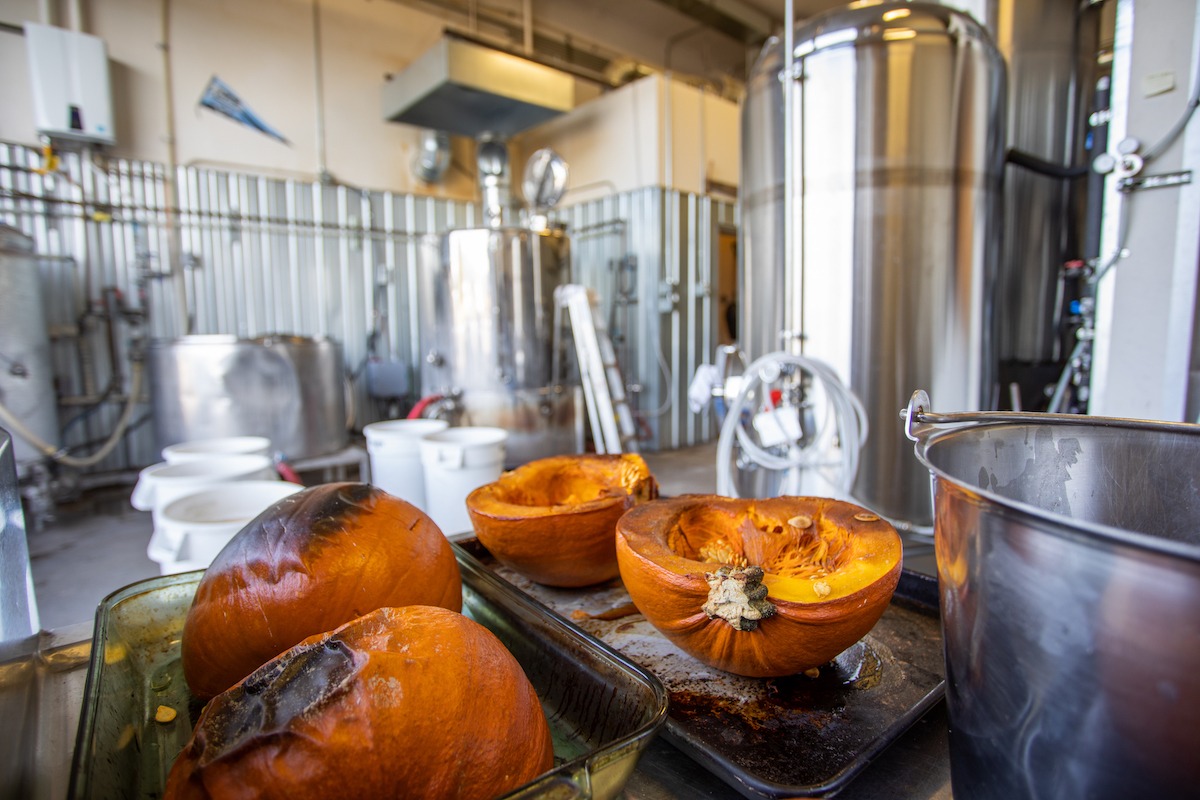 "
The pumpkins are roasted in the oven at home,” says Greg Howard, co-owner and General Manager of Great Burn. “Then they get mashed in. It gets added after the sugars are extracted, so the pumpkin flavor [can come through]. Then it goes into the kettle where it is boiled for a set period of time before more pumpkin goes in as well as spices.”

The beer needs to sit for about a week before it is ready to be tapped in the tap room, and from there a batch of this size will last about 2 months before it is gone for the year. Great Burn usually makes 6 or 7 barrels at a time, using Lifeline as their only pumpkin provider.

The reception has been awesome. “There are people who only come in once a year, and that is to get the pumpkin beer,” Greg laughs. “They will call ahead to ask if it is ready.” 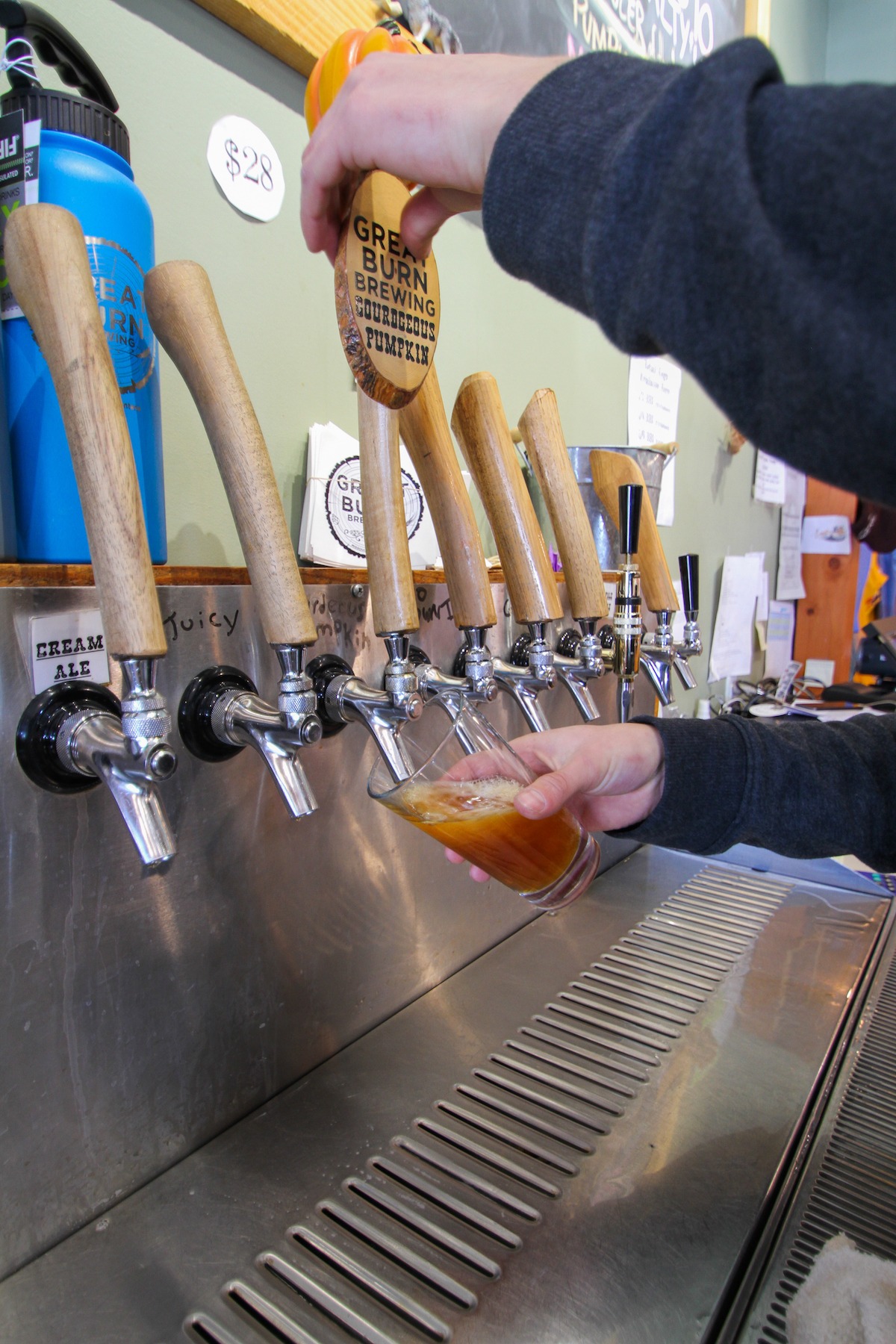 The result is a combination of local and traditional flavors. “People are into pumpkin spice—everyone gets it in their coffee, and now you can get it in your beer. [The spices we add during the boil] are a lot of the same spices you will see in that pumpkin latte mix. The local pumpkin aspect adds another element that makes it interesting and intriguing to people.” 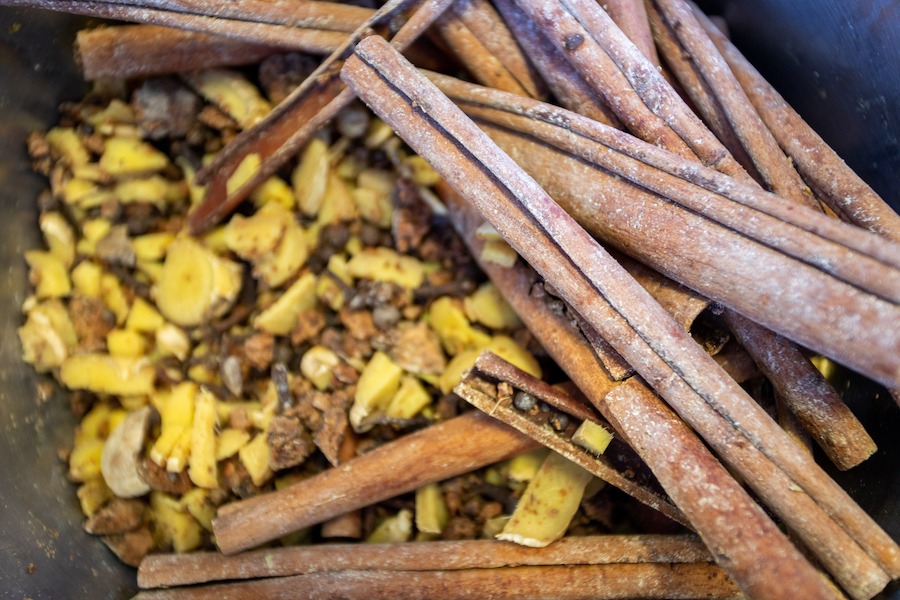 Great Burn enjoys working with local food producers on seasonal beer collaborations. The Gourdgeous Ale is one iteration, with others including a Belgian Cherry using Flathead cherries, integrating local hops from the Bitterroot, and brewing with teas from Lake Missoula Tea Company.

In the end, the story comes full circle. The pumpkins rise from the soil, and when all is said and done, the spent grains from Great Burn are given to Big Sky High School’s Ag program and fed to their animals. At the end of the year, Big Sky gives a pig to Great Burn to roast as a thank you to their customers around the brewery's birthday. And that pig can be paired with, more often that not, a local pumpkin ale made with pumpkins from the Bitterroot Valley. 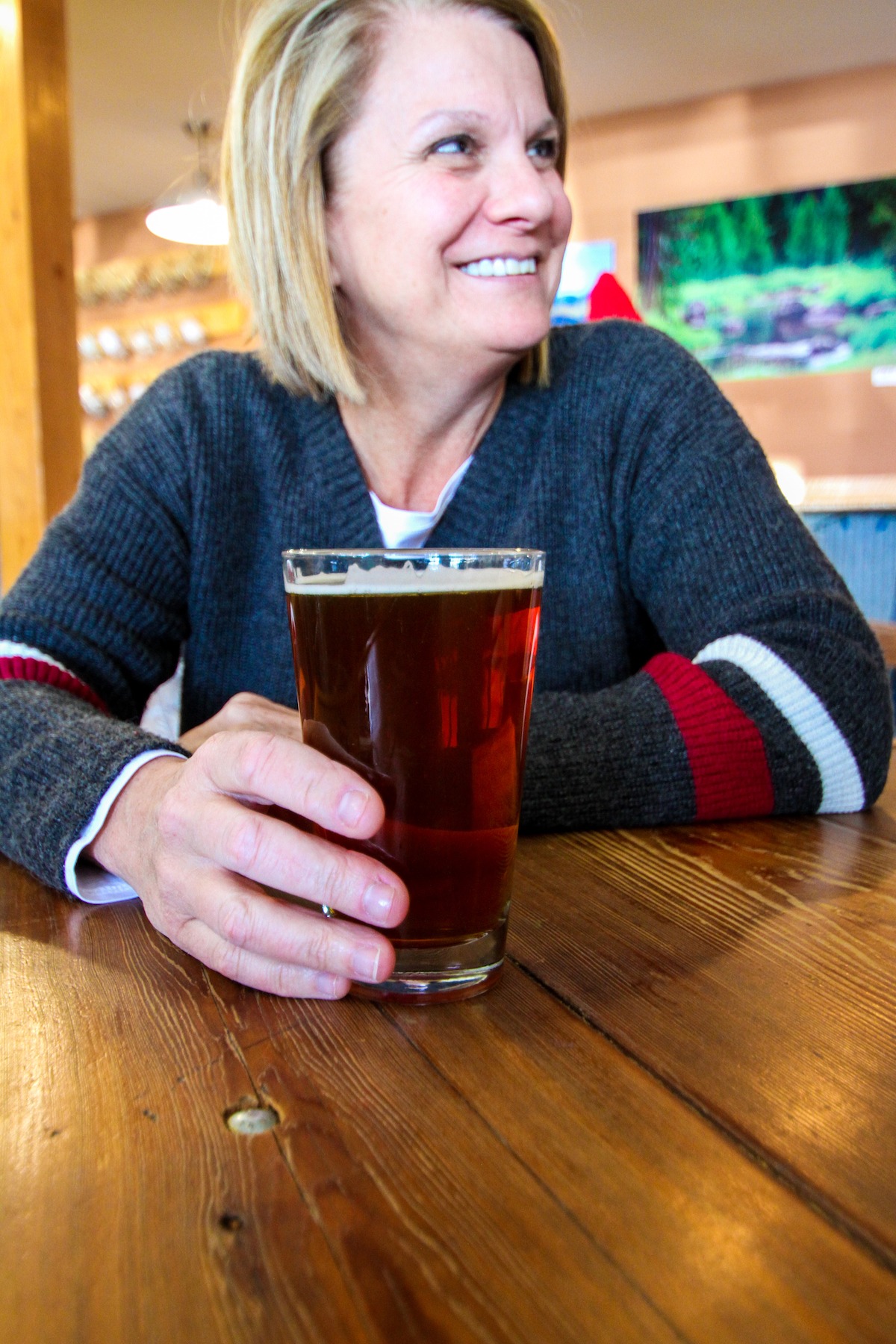 So yes, this is the story of a beer. But it is also a story of collaboration between many businesses and people who share a common interest in supporting local and producing products worth boasting. You never know what waits behind an opening door. Perhaps it is a young brewer waiting to shake the hand of a local farmer with the creation of something great lingering in wait.