"There's a Place for You Here" 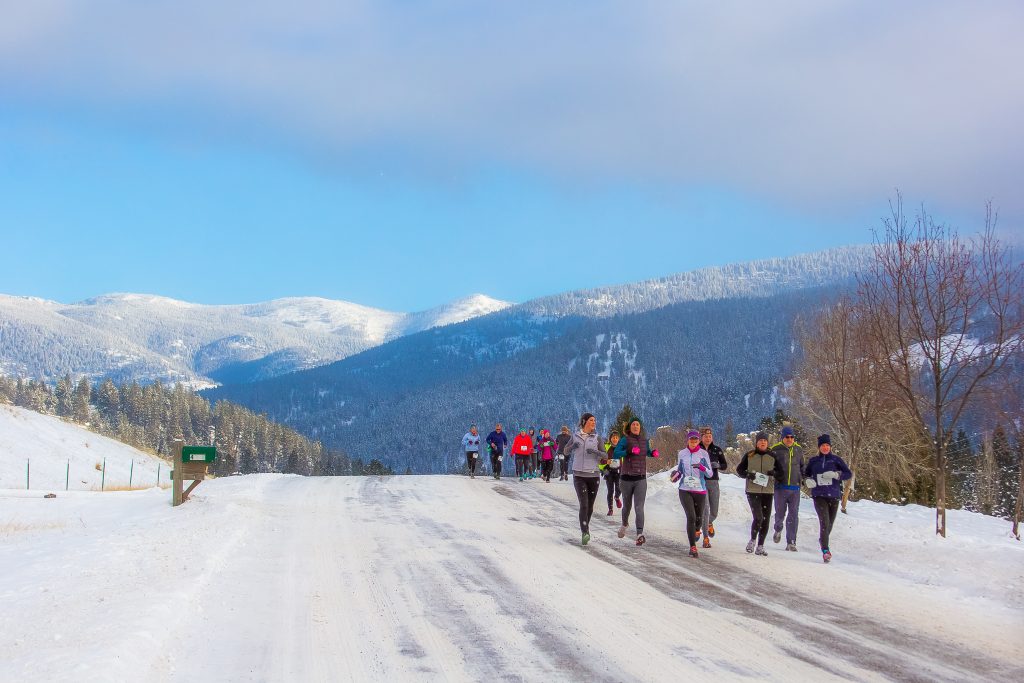 The Resolution Run is held on January 1st every year. Photo courtesy of Votography Images.

Every month, runners gather at one of Missoula's many breweries for a Wednesday Beer Run: they take to the trails, running a 3 or 5-mile course before returning to share a pint together. This event happens on the last Wednesday of each month, and it has become a sort of tradition. Almost monthly, these same runners and more take to the streets of Missoula and run 5Ks, 10Ks, and, once a year, a marathon or half marathon. They meet at the track every week for training runs. They take classes together to train for upcoming races. They can be seen on the roads, on the trails, and in the streets of downtown. These runners are all active representations of Missoula's only and largest running club, Run Wild Missoula (RWM) a group that fosters and nurtures runners from age 5 to 95 and that strives to support the sport of running within Missoula's community. I sat down to speak with Tony Banovich, the executive director for Run Wild Missoula, about the club, its roots, the marathon, and Missoula.

In many ways, the marathon was the catalyst for the creation of Run Wild Missoula in its current form, Banovich explains. "There was a group that existed before that was a small club called Missoula Road & Track Club. A group got together and decided 'we should have our own marathon,' so RWM was created, essentially merging with the old club in 2006. In 2007, we had the first marathon, and that was the first major event that kicked off the club."

From its humble origins back in 2006, RWM has evolved into the largest member-based organization based solely in the Missoula area. Currently, the club has close to 1600 members, and that number has remained steady throughout recent years. 200 to 300 of those members he calls active members who consistently participate in the happenings of the club. "An active member will do anywhere from eight to ten races in a year, take a class or two, and come to our monthly beer run. They will volunteer for a couple of events, too. An active member is out taking part in activities almost every week." Other members, he explains, are still involved, but just in a different way. "[These members] get the occasional discount in a race, maybe come to a beer run or two a year. We have certain businesses around town that we get some discounts for, so if nothing else people get some percentages off shoes and clothes at Runner's Edge and maybe a free beer at Caffé Dolce. In the end, the important thing is that our members are taking part in a fit and healthy activity." 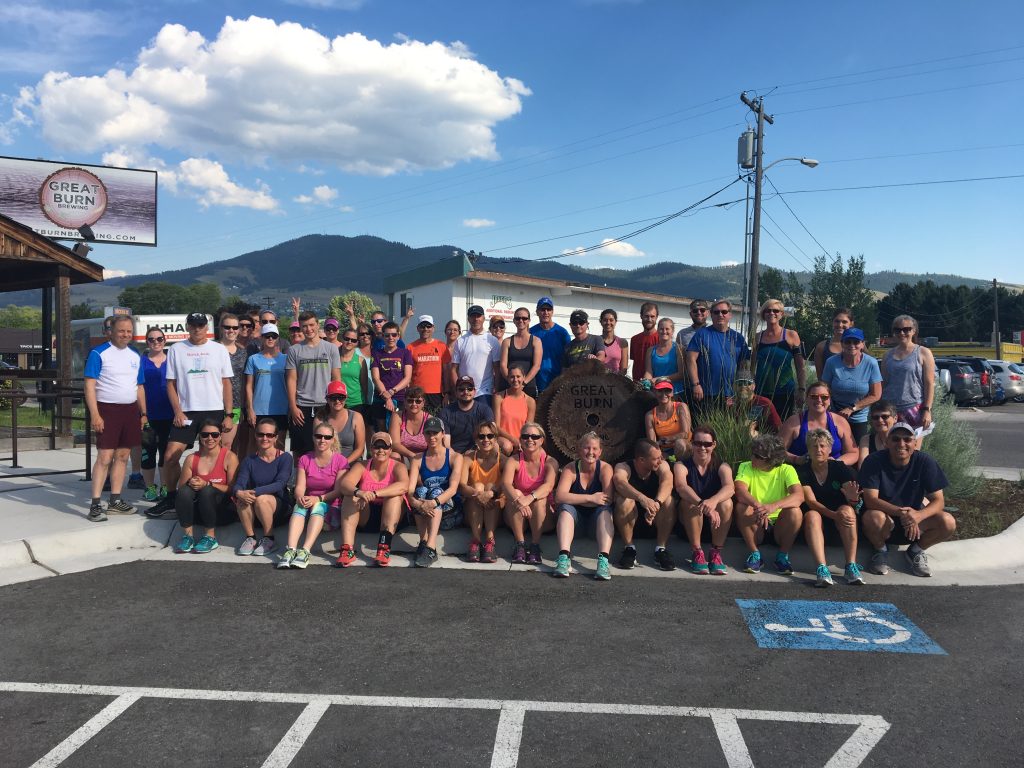 Runners pose for a shot at Great Burn Brewing after a Wednesday Beer Run. Photo courtesy of RWM.

While similar clubs exist in other communities, Banovich believes one of the main reasons for the success of RWM is the culture of outdoor recreation that is engrained in Missoula's identity. "I think we have a unique niche in that Missoula has become such an active fitness community, and we fit right into the heart of that. A lot of people will run or walk because it is an easy assessable exercise, but maybe they also go biking or skiing or paddle boarding, too. Those circles intersecting within running," Banovich elaborates, noting that another contributing factor for the success it the community support from businesses. "We've got some amazing community partners. The sponsors that come in are always excited to be involved because everything that we are doing is positive, healthy, good spirited, and exciting. I think it's in part the overall social fabric of the community that helps drive our success. To be successful you need to have that right culture." 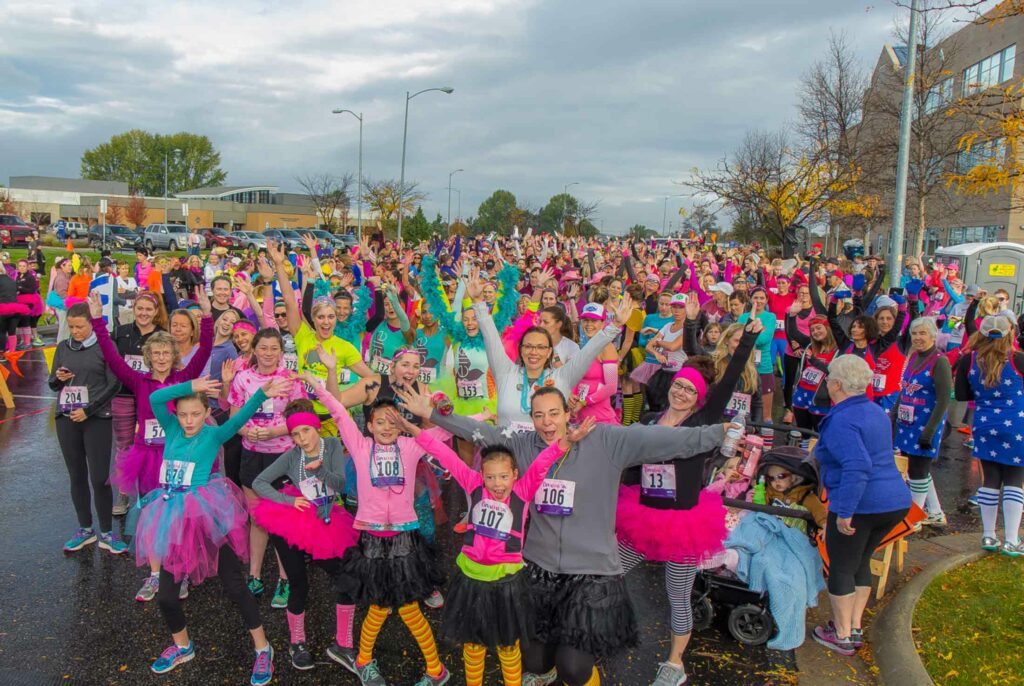 In 2017 alone, Run Wild Missoula sponsored 14 race events with the marathon being the largest race of the year. The marathon weekend has become a point of pride for Run Wild's success, and for good reason. That weekend is one of the busiest weekends in Missoula in the year, bringing in runners and their families from all 50 states and 8 countries, not including the United States and Canada. "Right off the bat [in 2007], the marathon was relatively successful. It was the largest marathon event in Montana almost right out of the gate."

The first year of the marathon, however, the weather was not ideal. Triple digit heat scorched Missoula, and sections of the route were exposed with no shade. There was a fear that this might deter people from returning, but despite the heat, people came back. Runners told other runners about this great event in charming, beautiful Missoula, Montana, and then those people came. Year after year, the marathon grew—and then it exploded. 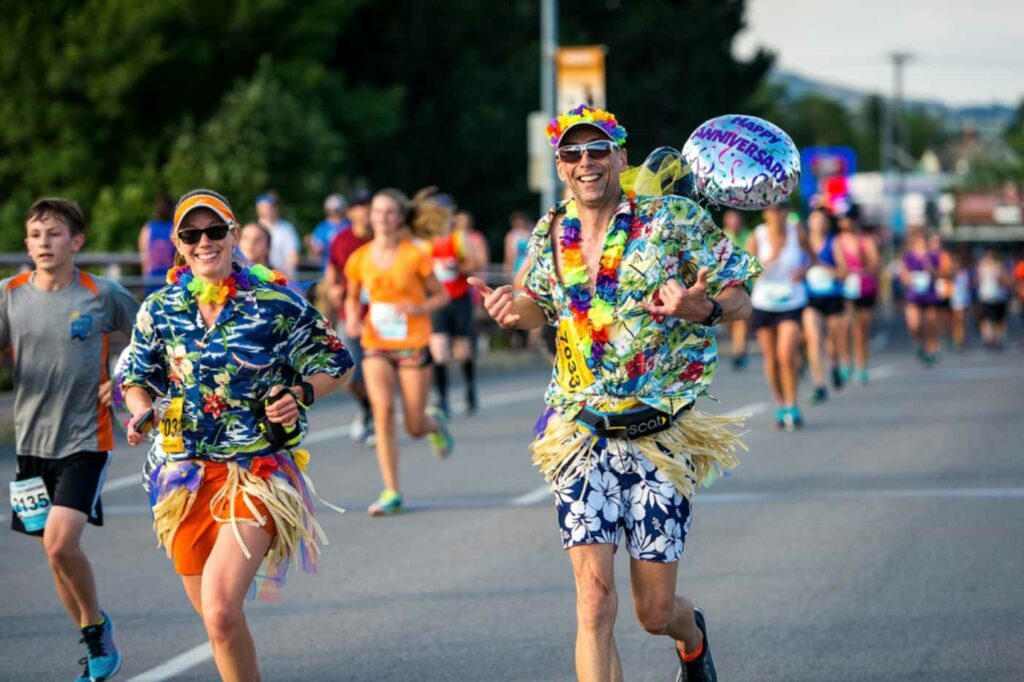 "Late [in 2009], Runner's World [asked] readers to vote on the best races, and amazingly enough, Missoula got named as the best marathon by the readers. That [article] came out in February of 2010, and the race exploded. It literally doubled from 2009 to 2010," Banovich explains. And the accolades keep coming in. These past few months alone, the Missoula Marathon was named the top marathon in the country by BibRave and again in January of 2018, Runner's World named the marathon the top bucket list race in the world. One reason for this, Banovich hypothesizes, is the fact that the marathon is designed by runners for runners, and with that design comes an acute focus on details.

"Virtually everyone in charge of the race is a runner, so it's a business of passion. People want the race to be good because we know what we would want from a race experience. We're going to give you the quality that you see in Chicago or New York or Boston, but you're going to get a small-town charm [you wouldn't find in those races]." 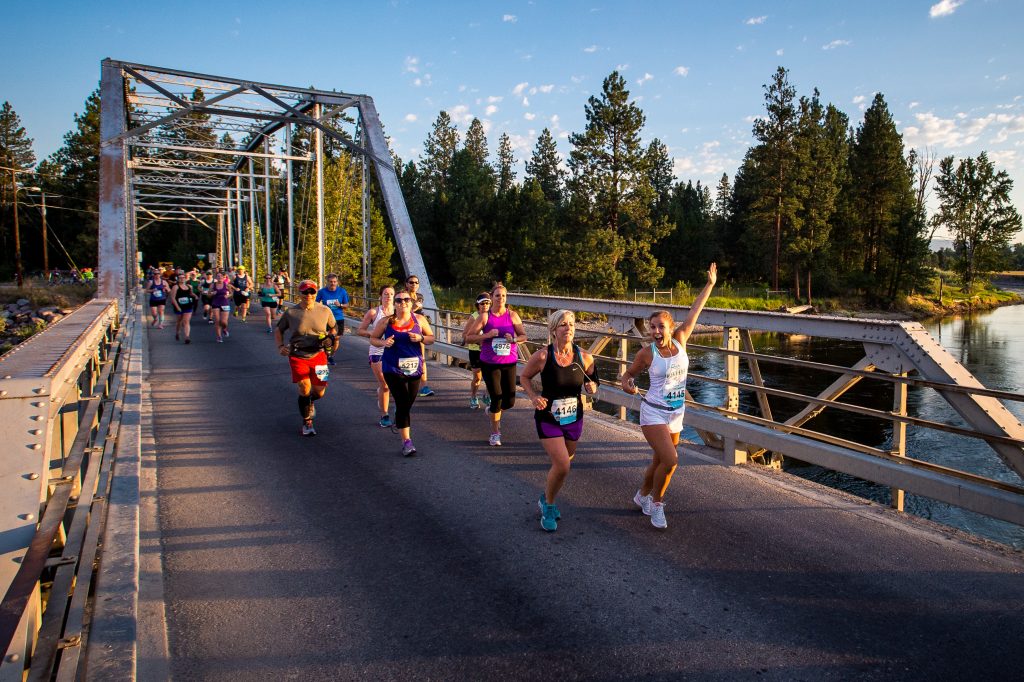 That charm is, according to BibRave and Runner's World, one of the main reasons that the Missoula Marathon is continually selected as a top race. "People are going to put their sprinklers out on the street," Banovich explains. "People are going to hand you ice from their front yard. Cowboys are out there waving at you. Gary Bowman from Morgenroth Music plays his grand piano out on River Pines Road. You would never get these types of things in Chicago or New York or Boston."

And, as an added bonus, after the race is done, visitors have an excuse to explore Montana. "We push that: come make this marathon a part of your Big Sky experience," Banovich says. "Come here and do the run, and then leap off to all these adventures from Missoula. You can go fly fishing up the Blackfoot. You can take a day trip to Glacier." The perfect combination of small town charm, high quality race, and access to adventure combine together to make the Missoula Marathon such a huge success. "People come to run, and they just get blown away [by the area]," he says.

The marathon weekend is a huge economic boost for Missoula as well, and that is one thing Run Wild is particularly proud of. "Roughly 3000 people together with their family or friends are coming and staying here, and most of them are flying here. We know that Griz football games do this as well, but outside of those games, this is probably the biggest weekend in the community. And we are thrilled with that. We do everything out of Caras Park so we can base it out of downtown and encourage people [to go eat and drink and celebrate]. We see huge spikes. We hear anecdotally from restaurants that those are their busiest nights of the year. We think that is an important part of our role in the community." 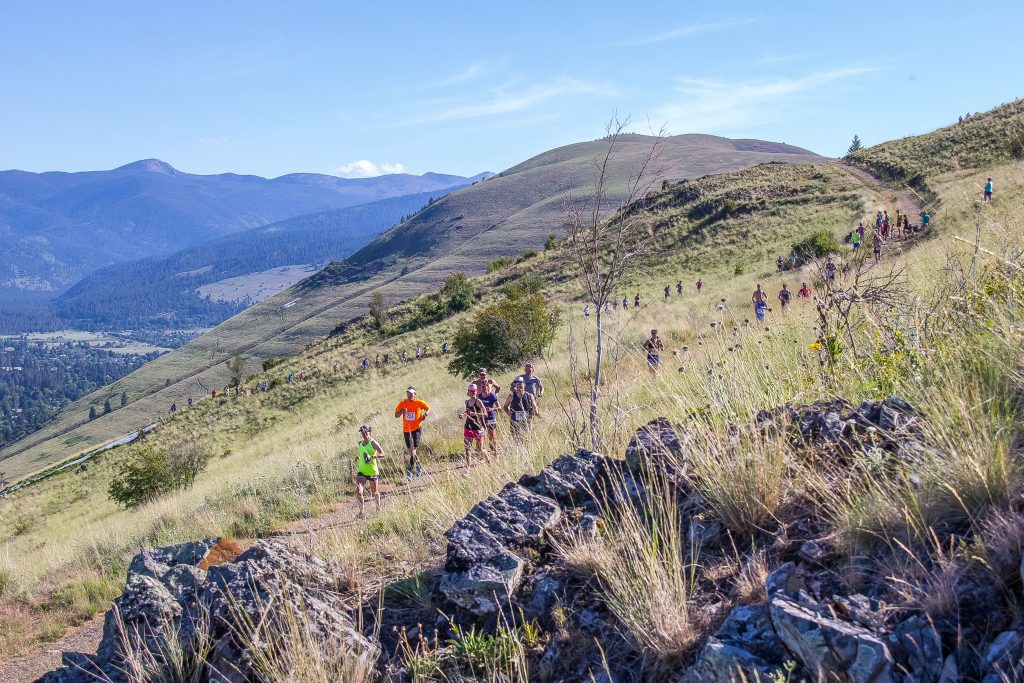 Run Wild Missoula is a core part of the Missoula community, and they plan to continue to provide high quality races, educational classes, training groups, and community development moving forward. "Our mission is to promote running and walking for people of all ages and abilities. And we see that in our club at every event. We have little kids out there running as well as folks like Bob Hayes, who is 91 years old and is still coming out and doing races. And we have people who are elite like Trisha Drobeck, who is an Olympic Trials participant who is in the upper .1% of runners in the U.S., and then we have the walkers who are doing 20-minute miles, but they are out there walking for 7 hours to finish the marathon."

This age and ability gap is, according to Banovich, one of the reasons that running as a sport is so popular. "It is a sport you can do throughout a lifetime for most people. We have 12 participants over 80 in the marathon. Virtually all of our races we have many people over 70. Whether you are starting from step 1 with walking all the way to training as an elite runner, there is a place for you here. We hear so many stories about people who start out walking and now are runners. We see for some people it is a significant change in their lifestyle or their quality of life, and some of them it can be profound. People do things through the club that they didn't think they could ever accomplish. I can't tell you how many people say 'I never thought I could get to the M' and they are walking to the M. Or 'I never thought I could do a 5K' and now they are running the marathon. We try to have a community that supports people accomplishing their goals. And that is what we are trying to do—to have people live a healthy, active lifestyle, both mentally and physically." 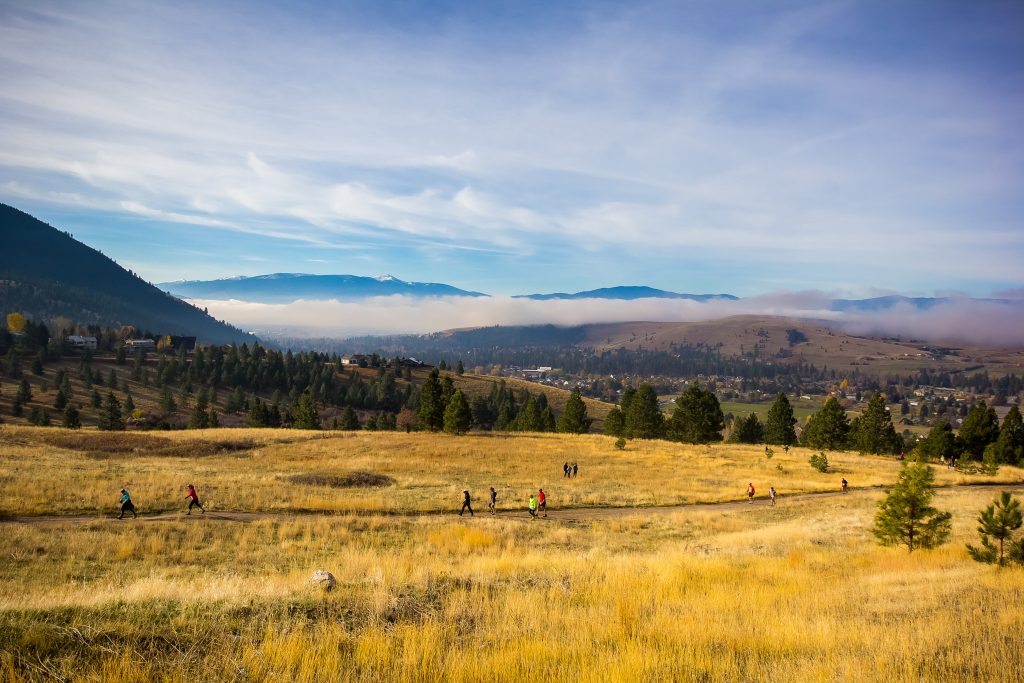