The Man Who Knew No Law

We all know (or have at least heard of) Cranky Sam—Missoula’s relatively new pub house. They serve up delicious beer, brewed right next door, and offer a handpicked wine and cider list too. They host live music, game nights and typically have a food truck or two positioned near the back patio for hungry guests. But what do we know about the name? 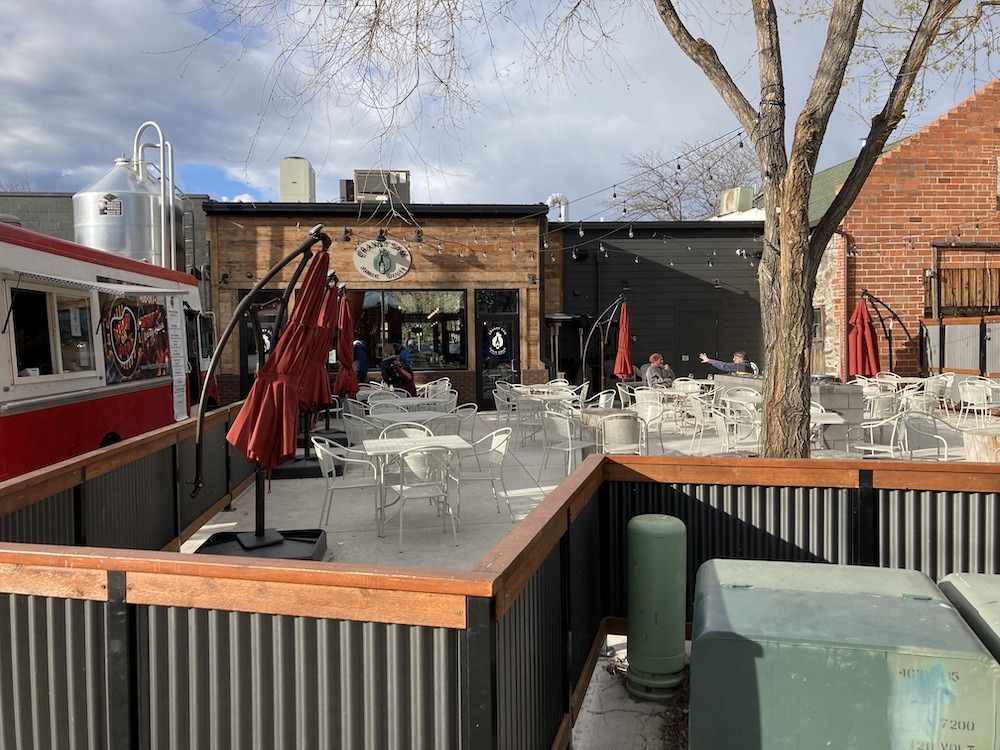 When wife and husband Jennifer and Jed Heggen first envisioned the space for this bar back in 2018, it had a different name completely—Black Timber Brewing. A name they didn’t love but thought would do, unless something better came along. The initial design of the space had a different aesthetic and they knew nothing about the history of the building—or the entire area for that matter.

The building they rented from the Duncan Trust Family had formerly been inhabited by Reynolds Radiator Shop, and it needed a lot of work to be transformed into the modern and lively bar they were envisioning. But to reach that vision, there would be a lot of work to do, and it was going to take some time before the place was up and running. Walls needed to be knocked down. The floors needed to be pulled up. Plumbing needed to be addressed. So, when they hired their master brewer, Timmy Evon, there wasn’t much for him to do. The Heggen’s decided to send him down to the University of Montana to dig through the city archives and gather information about the building— back in its hay-day—to see if they could glean some inspiration from its origin story.

But they weren’t expecting to discover the kind of story that would change the way visitors, residents and historians alike perceived this part of downtown Missoula.

In the late 19th and early 20th century, the building that houses our current day Cranky Sam was pitched in the middle of a red-light district in Chinatown. And boy, was it rowdy. Historians can only speculate as to what sort of seedy business occurred in this area, but they know one thing for certain: Cranky Sam—an infamous Chinese immigrant in this location—was up to no good.

Though no one knows the real name of the man who English-speaking locals dubbed “Cranky Sam,” his criminal activities were well-documented in old news clippings and police reports. In one Missoulian article dating back to 1908, Cranky Sam had been arrested for running an illegal “hop-joint”—“hops” being slang for opium. So, yeah. Probably some kind of opium den. The term “hops,” ironically, was adopted by the brewing community much later. 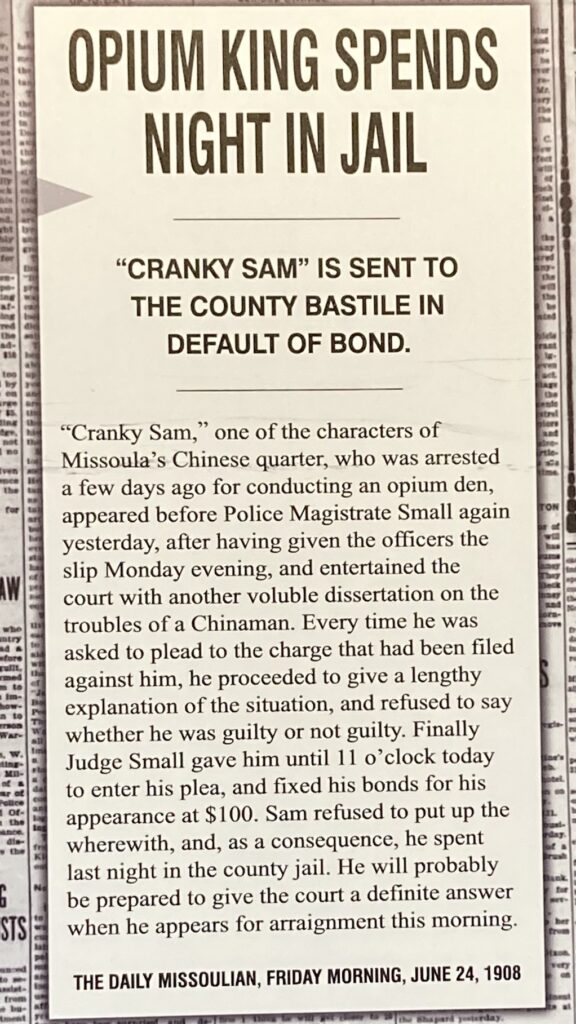 Cranky Sam lived on the Clark Fork River—on the little island you can still see from Brennan’s Wave—before the river was rerouted. He was regularly arrested for illicit activities, showing little remorse for his behavior. He was even criticized by his fellow outlaws for allegedly taking up a romantic relationship with Charles Love, an African man known for being both a fantastic hair stylist and prizefighter.

Cranky Sam died in 1910, reportedly due to alcoholism. His obituary was brief and without affection, entitled, "Cranky Sam Goes At Last." The summation of the community's feelings towards the infamous man:

“He was known to every frequenter of the restricted district as a man who knew no law and respected no person.”

…I mean, how could you not name your bar after a character like that?

So, the Heggens did. But the wild history of the place didn’t stop there.

“Nothing but dirt and history underneath the concrete ground.” -Jennifer Heggen

In 2019, as the space was being renovated, construction crews began uncovering mysterious relics from the past: pieces of pottery, glass shards, and even a perfectly intact, thick, cobalt blue medicine bottle. As the artifacts  continued to emerge, a team of 10 fervid students from the University gathered their book bags and marched over to the pub-to-be (during their summer break, to boot) to help dig, document, categorize and discern the history of Missoula’s red-light district. And there would be much, much more to discover. Thousands of artifacts were unearthed beneath the concrete ground in the building, much of them associated with Chinese culture: Chinese ceramics, vials from traditional Chinese medicine and opium paraphernalia. They even found some Go game pieces. 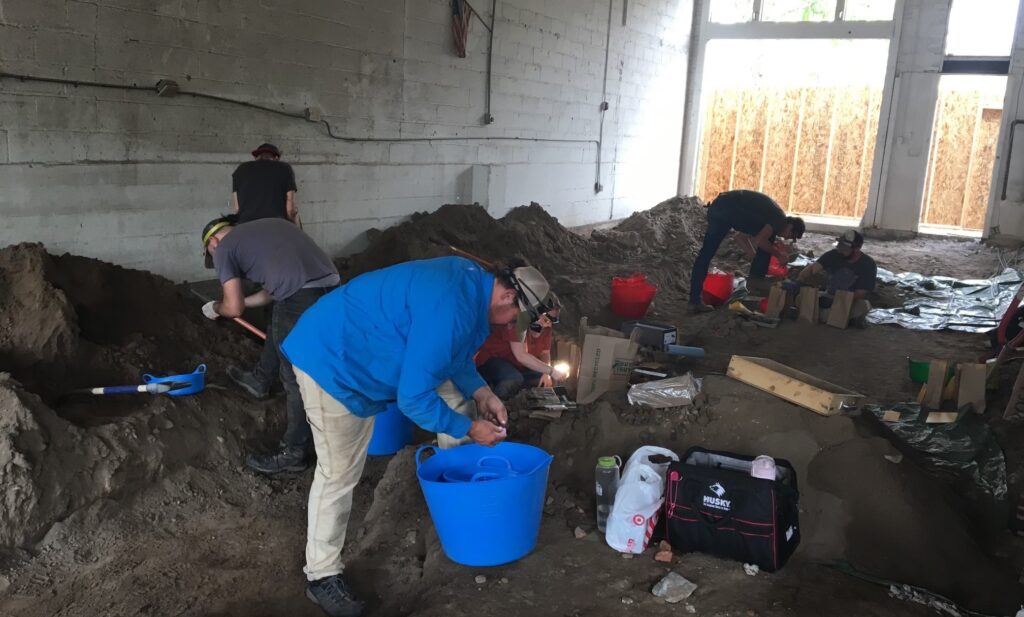 Former UM Anthropology graduate student, Kate Kolwicz, who played a primary role in the archeological digs, was quoted in a story about the findings by the UM College of Humanities and Sciences:

"Because of the small size of the Chinese population in Missoula and the amount of urban development that has occurred over the last hundred-plus years, this site is one of the only Chinese archaeological sites that we are likely to find in the city."

The excavation site also uncovered feminine products, perfume and cosmetics. Historians and archeologists have long attempted to piece together the spotty history of sex work in this district, and they may have just hit the jackpot.

Arguably the most compelling discovery, or at least the most thrilling, was a painting of a naked woman. This pin-up girl was thought to have been created somewhere between 1920-1940—by an artist with some serious talent. 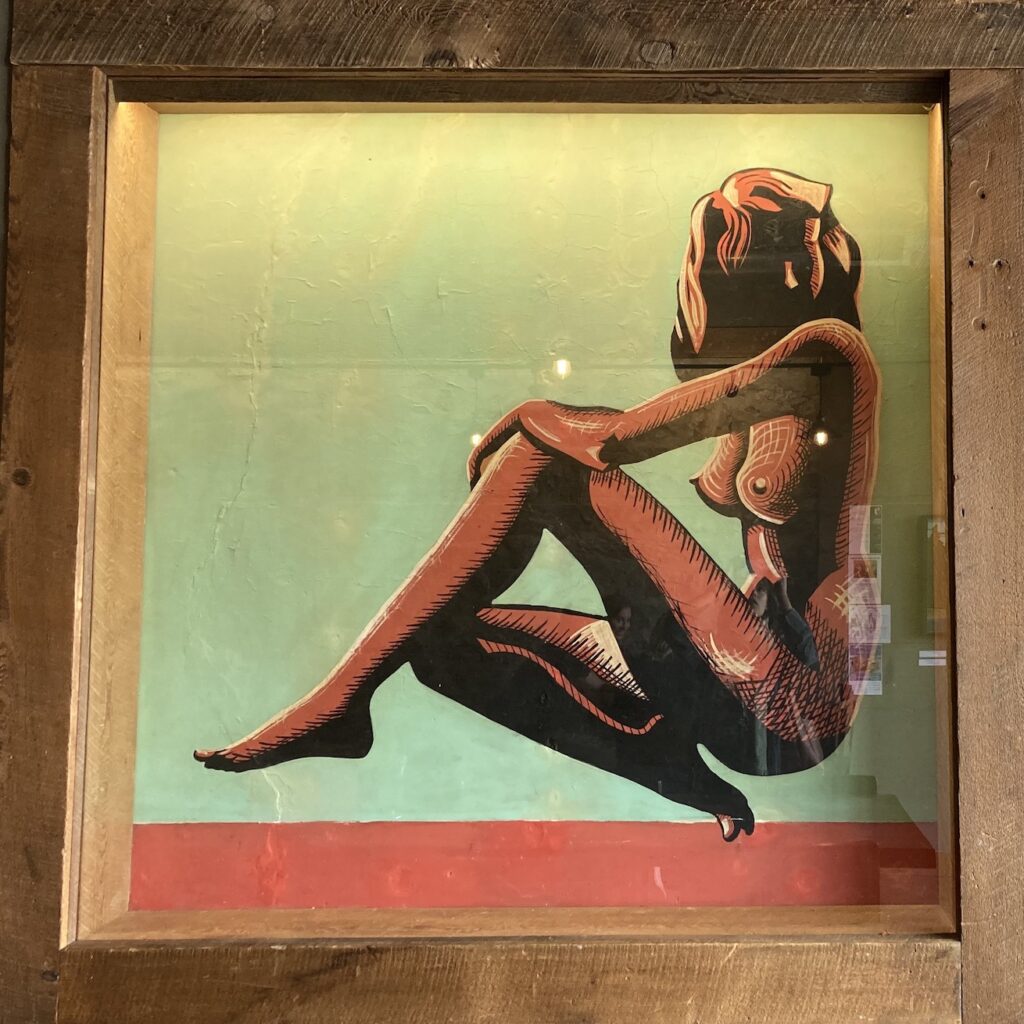 The stylized, red-silhouetted mystery woman sits on the balls of her feet, with her face turned toward the street outside. The mural was found in surprisingly good condition, after having been covered up by layers of drywall over the years by previous tenants. The Hidden Lady looks like she walked right out of a graphic novel. The contrasting reds and whites, along with the black cross-hatching technique, has been speculated to fall under the Social Realism genre of art, which gained popularity in the early 20th century as a way for artists to express social or political unrest.

Wherever this mysterious woman came from, it was definitely enough of a (literal) sign to deduce that this building was, at least partially, used as a brothel.

The painting was restored with the artist aiming to keep the original style and color scheme as intact as possible. The Hidden Lady is now displayed in a shadow box in the side room of Cranky Sam. No longer hidden under drywall and plywood, her mysterious gaze can now fall on the street once again.

Paying Homage to the History of the Lesser Known

The bar owners were aware of the potential backlash that could come with creating a pub theme based on sensitive historical findings, like so many others have done before. And with the excavation being performed in the red-light district, the Chinese artifacts and sex worker implication could put the bar at risk of potentially racist, sexist or sensationalist commentary. But the business found ways to show their genuine interest in the complicated history of the building.

“We were definitely sensitive to the situation and didn't want to appropriate the stories of the people who had lived in this district. But I feel like we’re celebrating, paying homage to the history of the lesser known, underrepresented members of Missoula’s past, because they were so important and they belong at the forefront,” Jennifer Heggen said.

Along with the excavation and the restoration of the Hidden Lady, the business removed the 100-plus-year-old beams from the roof to fashion into a bar top. They’ve displayed artifacts from the dig in several corners of the space, and newspaper clippings describing the history and archeological findings are posted on the walls.

They’ve made Cranky Sam into part museum, part pub. What could be better?

The rest of the artifacts are still with the University of Montana, protected, far away from beer spills and drunken accidents.

Cranky Sam is also featured in the Unseen Missoula historical walking tour, which gives visitors an opportunity to learn about Missoula’s most prominent—and often unknown—landmarks.

What’s to Come: Horseshoes and Wine

Now that the digging’s done and the concrete has been laid, Cranky Sam pub is in full swing, without any plans of slowing down. The building next door will be used as another social drinking space, but this one will feature wine and food.

“The building on the other side of that wall is considered to be the third oldest building in Missoula—built in 1868. It’s made of stone, ripple rock—the whole thing, so some historians think it could’ve been used as a prison or gallows. Fast-forward thirty years [after it was built], and it became a stable house for horses. We’ve actually found horseshoes in there,” Jennifer Heggen said.

They plan to remove the wall that separates Cranky Sam from the old stable, so visitors will have access to both spaces once inside. But for now, it makes for a great keg storage unit.

What will they call their newest historical drinking site? Stables Wine Bar.

They hope to have the new bar open to the public by January 2023, but in the meantime, visitors can stop by Cranky Sam for live music, game nights, award-winning beer and a helluva history lesson.